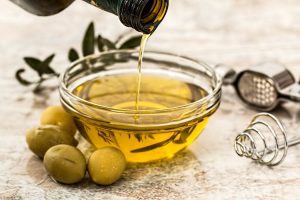 Amidst the bad press surrounding the olive oil industry, two brothers in their mid twenties intend to set the record straight, and have established Honest Toil Olive Oil, bringing unrefined 100% pure extra virgin olive oil from Greece to the UK. As they are keen to tell me, this is not like the olive oil you can buy in the average UK supermarket.

“Most olive oils are ‘blended’ from all over Europe. What this really means, is that companies often use Greek oil to lower the acidity content of naturally inferior but cheaper olive oils from other parts of Europe. ‘Made in Italy’ does not necessarily mean any more than ‘bottled in Italy’ and it’s extremely common that such oils contain produce from Tunisia, Spain, Greece, and Morocco.

With Honest Toil, we wanted to keep it simple; pure unadulterated, single-estate squashed olives, and bring to the UK an oil that’s unlikely to previously have left the kitchens of small-time Greek farmers…” 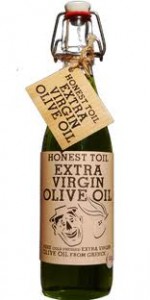 The idea to bring olive oil to the UK first came to Tom a few years ago when travelling in Greece and was presented with the idea of the common Greek rate of payment for picking olives; half of the oil. He immediately knew that this was nothing like what gets sold as ‘olive oil’ in the UK “…a thick, brilliant green… this cold-pressed olive juice is anything but greasy… and such flavour!”

Tom convinced family to spend more time in the area, and leased a small olive grove that annually produces several hundred litres of olive oil. The region is made up of countless small groves, almost every local owning a small plot of a hundred or so trees, and Tom spoke to neighbours who were all keen to find an outlet for the pure olive oil they know to be so good. “Starting with our immediate neighbours, we’ve been mucking in on their harvests and getting their untended trees back into shape.”

“This season’s harvest is now underway in Stasio, and we’ll pick right up until Christmas. Alexander from our village press squashes each batch separately; each farmer getting his own oil back within a few hours of being picked.”

The finished product has less than 0.3% acidity – one of the purist extra virgin olive oils available. It has a subtle, almost grassy spice to it, which combines with the oil’s smooth ‘green’ flavour to leave a fantastic aftertaste when eaten with breads and salads. Its colour alone speaks volumes…

“It’s all about getting our product to the right marketplace. The big supermarkets can under cut us in price every time – but they can’t match us on quality”.

Thanks Tom, we love local food, but also the story behind really good food and getting the money to the producer and not fat cat corporates whose accountants have cut costs by blending inferior products.

Our local British rapeseed oils have their place in the kitchen but so does really good olive oil that can enhance and improve all kinds of dishes and help bring out flavours.

More information on Honest Toil Olive Oil can be found at honest-toil.co.uk, and the extra virgin olive oil is on sale in the BigBarn MarketPlace here.