Should we eat ponies, baby cows and rare breed livestock? 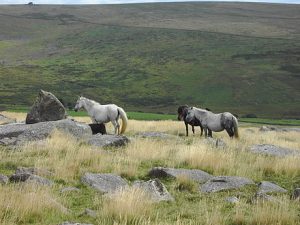 According to a feature on BBC Countryfile the answer is yes! (Watch again here.) We should eat Dartmoor Ponies to help sustain Dartmoor’s ecosystem, baby cows because the males are shot at birth, and Rare Breed Livestock to insure farmers continue to breed them.

Sounds wrong, I know. Firstly ponies; A quick survey completed when it was first suggested that Dartmoor ponies should be eaten showed a 70% NO. Since then, once all the facts were published, the vote has reversed.

The ponies have grazed Dartmoor for thousands of years and have become crucial to the moor’s ecosystem, effecting the flora and founa and even the butterflies. Now they are not used by farmers, tin mines and quarries they either need to be culled to control numbers or given contraception!

It seems a more holistic solution would be for us to eat them, instead of factory farmed meat, especially as the meat is much healthier.

Next baby cows: If we want milk we also have to realise that cows will not produce milk unless they have calves. Females calves can become dairy cows, male calves can’t. Traditionally the males have therefor been shot at birth, or sent to Europe where they are kept in crates, given a milk only diet to keep the meat white, killed when 18 weeks old and ‘prized’ as Veal.

To stop this happening we need to eat Rose Veal, Rose because the meat is pink due to a better, healthier, diet and 35 weeks living in fields, or straw filled sheds. Worth noting that 35 weeks is much longer than the average lifespan of factory farmed; chicken 6 weeks, pork 22 weeks and lamb 27 weeks.

Last of all Rare Breeds. Like the ponies we need a variety of livestock in our ‘ecosystem’. Animals have been cross bred over the years to achieve higher milk production, or reduce fat, or grow quickly. Sometimes however farming practices and consumer preferences change and the older varieties of animal are more valuable. 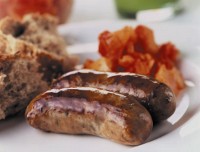 In the dairy industry for instance the old fashioned Jersey that produces full cream milk and lives for 10 years is becoming popular compared to the modern Holstein cow that produces huge amounts of watery milk but only lives for 4 years.

To conclude; I am like the 1 in 4 people surveyed by Mintel who are cutting back on the consumption of meat. And when I saw the brilliant film Okja recently, I nearly gave up pork! I think we should eat small amounts of meat. So I have just bought some Pony sausages and mince, to make burgers, through the BigBarn MarketPlace here. Will get my Rose Veal here that should really be called Rose Beef, and not eat pork unless it comes from a rare breed.