January is a strange month, on the one hand it’s absolutely flying by, but on the other we’re only half way through and it seems to be lasting forever! Turns out it’s possible to have a little bit of mid-month excitement though because the rhubarb season technically starts now! While it may not have appeared in your garden yet, you’ll probably notice that there’ll be some forced rhubarb cropping up in your local farm shops now.

If you’re a resident of the North East we highly recommend keeping an eye out for Yorkshire’s pink-tipped forced rhubarb because it packs an absolutely amazing sharp and tangy flavour, that’s really something.

While it’s unique to the Yorkshire triangle (Wakefield-Leeds-Morely), forced rhubarb has been harvested in the dark by candlelight for over 150 year, with the silence broken only by the crack of stalks of rhubarb puncturing the earth.

While we’re leaving the EU shortly, our membership has afforded the forced rhubarb protected status and it’s a truly magnificent product with slender, sweet and tender stalks that are far more robust than the outdoor grown variety. The colours are also quite fantastic, ranging from a delicate blush pink to a deep crimson red – and you’ll only find these between January and March so get your skates on and buy yours before it’s too late.

If you fancy having a go, rhubarb is one of the easiest vegetables to grow and is perfect for first time gardeners! Now is actually the perfect time to sow some too. We’re willing to say it’s so easy to grow that you can sow it from October right through until March and you won’t have any problems growing it, so don’t feel that you have missed your chance. Just bear in mind, that it will need to be in a partially shady spot with good drainage and decent soil. 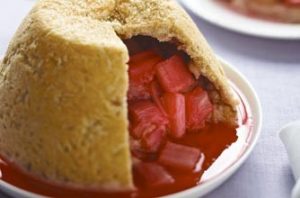 Once it’s grown then harvesting is from April, although we must admit we’ve eaten it right up to early September – the only caveat is that you’ll probably notice it’s a little bit tart and maybe a touch woody, but still good. As tempting as it might be, it is highly recommended not to harvest your rhubarb in its first year. That does mean you will have to wait 2020 out, but you will thank yourself for holding off because it will come back year after year without issue.

As you all know, rhubarb is a most brilliant vegetable and goes perfectly with strawberries, raspberries, as part of crumbles and even with belly of pork. For more recipes check out our website here or take a look at our recipe of the day page for a rhubarb recipe everyday this week. We will also be talking about it on our Facebook page so why not head across and “like” us and support local this year.

You can find all your rhubarb needs on our local food map. Or you can buy rhubarb and rhubarb products direct from our MarketPlace.