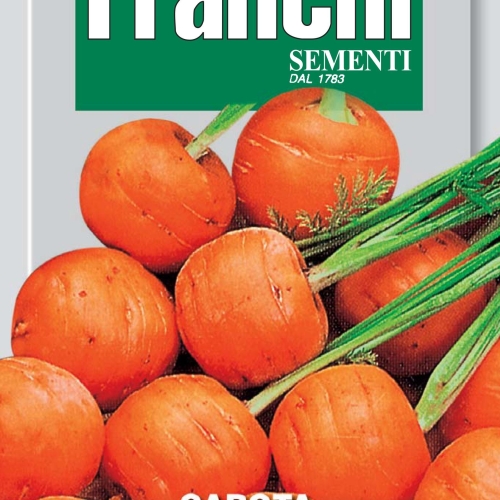 * This variety is on the Slow Food Ark of Taste which means it is endangered. By using Franchi seeds you are supporting BioDiversity. https://www.fondazioneslowfood.com/en/ark-of-taste-slow-food/paris-round-carrot/

V18 - Featured on BBC Gardeners World 20/04/07. Round French Parisian carrots with good flavour. It's a classic case of the carrot changing to suit it's environment, and is basically a clay carrot. Easy to grow in containers and not as prone to carrot root fly. Sow in the Spring as you can get quite a late sowing. Also great to use in Indoor Farming systems and for Urban gardening in containers.The carrot (Daucus carota) is also called “Pastenade”, probably arrived on French tables in the 14th century, but at the outset it had little in common with the carrot we know today, since it was white, tenderer and mostly more fibrous. It took until the 18th and the middle of the 19th century for the orange varieties – coming from Afghanistan – to be more and more appreciated, probably for its tenderness. In the beginning it was known as a “lower class” vegetable, reserved for the common people, historically a very consumed vegetable, and still the second most eaten vegetable in France today. The Paris market carrot is a small round one (2-4cm in diameter) of the Grelot type that is sought after for its tenderness and sweetness. It is a very early carrot, fast-growing and preserves well; it can be sown all year round, and especially in spring and end of summer. This variety grows on the surface of the soil, and it also prefers sandy to clayey but not compact soil. Some people attribute a honey flavour to it; when used in the kitchen, it is often prized in part for what sets it apart: its unconventional shape. Carrots are inseparable from the popular stew, beef-carrots and also Vichy carrots, created in the 16th and 17th centuries and cooked in Vichy thermal water. Like all ancient vegetable varieties, the Paris round carrot has a low yield, a surprising aspect that can make it difficult to use. Thus it has been replaced by more productive hybrids that often have no heart (or at least a very thin one) like the Nantes or Touchon varieties. There are not many market farmers who grow it. One of them, Laurent Berrurier, tells us he grows on average 500 bunches per year (about 450 kilos).