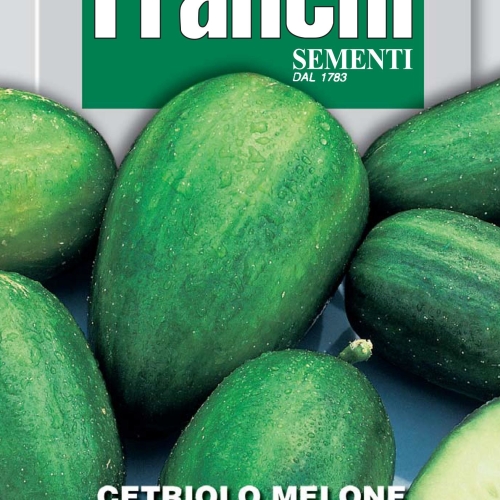 *Heritage Variety*
* This variety is on the Slow Food 'Ark of Taste' which means it is endangered. https://www.fondazioneslowfood.com/en/ark-of-taste-slow-food/carosello-2/

S12 - Melon Cucumber. Grown since Roman times, this vigorous, round cucumber variety is once again popular. Makes nice round slices. This is a 'Melon Cucumber' as above. Indoor. As featured in the Telegraph 01/10/06 by Bunny Guinness.
Immature cucumber melons from the local varieties have been eaten in Apulia for centuries, as a substitute for cucumber. They are eaten raw in a salad, without any dressing or with just a pinch of salt. The most commonly used varieties are Carosello and Barattiere, both of them belonging to the Cucumis melo species. The different varieties are often named after the colour of their epicarph, their shape or the name of the area they have been selcted in and brought on with cultivation.Carosello melon is now produced in the provinces of Lecce (where it is also cultivated in glasshouses), Brindisi, Taranto and Bari.