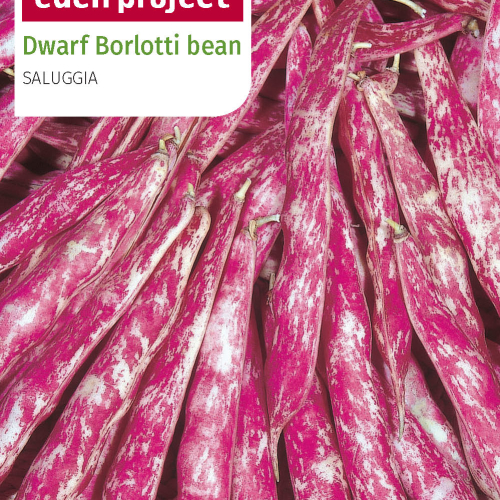 *This bean is on the Slow Food 'Ark of Taste' which means that it is endangered. By using Franchi seeds, you are supporting Biodiversity https://www.fondazioneslowfood.com/en/ark-of-taste-slow-food/saluggia-bean/

Can be stored over winter dried or frozen for when fresh veg is scarce.

Borlotti beans, from northern Italy, are shelled before eating. For freezing, shell when the pods are still leathery, for drying, shell when the pods are completely dry. The beans are used in a variety of local dishes. Paniscia (from Piemonte), half way between a risotto and a soup, contains beans, meat, rice and savoy cabbage. Bean salad contains beans (cooked until tender) mixed with tuna in olive oil and finely sliced red Tropea onion. Borlotti beans are also wonderful for making Italian baked beans in a rich tomato sauce (tomato, molasses, garlic, brown sugar, balsamic vinegar, Dijon mustard, onion and beer).

The Saluggia bean is a variety of Pheseolus vulgaris of very small dimensions grown in the municipality of Saluggia and in small portions of land in surrounding municipalities including Livorno Ferraris, Cigliano and Crescentino.
The stalk of the plant reaches a maximum of 50/55 centimeters and it has a compact bush; its flowers are white and reach large dimensions. The pods are cylindrical and curved and are white/yellow with red streaks.
The Saluggia bean is sown after the cultivation of barley, thus in June and July; it is harvested in September. After harvesting it is dried, since the beans are sold dry.
The beans are placed under the sun outdoors to dry when weather conditions allow this. If this is not possible a traditional dryer is used keeping the temperature low. After this phase an initial cleaning is done to separate the coarser impurities and any foreign objects like pebbles or soil.
The presence of the Saluggia bean is mentioned in some historical sources dating back to 1535 and it still plays an important role in the local economy.
It was the base of the diet of people who live in the province of Vercelli; the Saluggia bean is used in some traditional dishes of the area such as fagioli in pignatta alla Saluggiese, a type of bean soup or in Panissa, a type of risotto, symbol of the cuisine of this province.

Annual: Sow 2cm deep, from April to July in modules to transplant outside after risk of frost has past or sow directly outside from May when the garden has warmed up in well-prepared soil containing generous amounts of compost. Protect from slugs and snails. Easy to grow, sow, wait, then harvest at the end of the season.