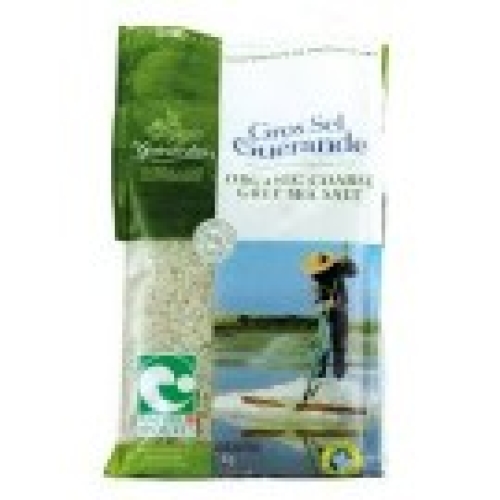 Sold by: The Real Food Company

Traditionally harvested Atlantic Sea Salt from Brittany. This salt has not been ground, and as such is called coarse salt.
There is an idea that when a salt ctystal forms, gases are encapsulated within it. This salt is completely as nature created it - unwashed, unground, unrefined - nothing added or removed at all.
Tested for purity - certified organic with Nature and Progress.

The Difference Between Unrefined Celtic Salts and Rock Salts (Himalayan salt etc.)
Many people think Himalayan salt is better because it comes from a time long ago. This may be true, but there is much more to this picture. In France Himalayan salt is called Fossil salt. This is because it has become rock through millions of years of geologic activity. As rock, the minerals in the salt have become fossilised. These minerals cannot be called organic minerals. The minerals in an unrefined sea salt are organic, and as such are bio-available and used well by the body. The organic minerals in sea salts are created in the most part by the decomposition of life forms in the seas. Only a small portion is from rocks broken down by the action of water. For minerals to be bio-available they need to have been passed through a life form - either plant or animal. This is the food chain, from rock to plant to animal.
Regarding the potential for micro plastic in Guerande salt: Micro plastic floats on the surface of the water, the salt is created at the bottom. The water is filtered seventeen times before the last collections ponds. These systems of filtration are very sophisticated; sometimes it is the water of the surface which is filtered, sometimes the water of the middle and sometimes the bottom water in turn, up to seventeen times.
No analysis has ever found any micro plastic in the Sel de Guerande.