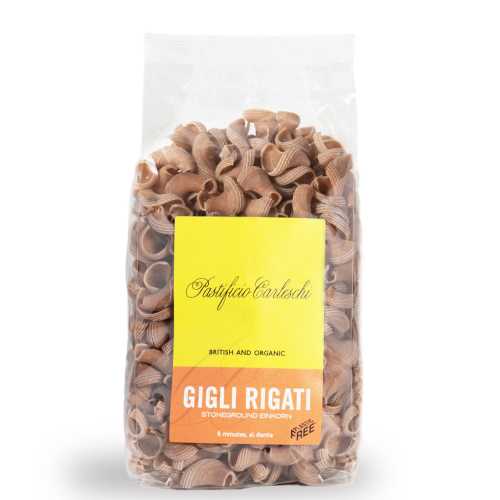 Einkorn (T. monococcum subsp. monococcum). Einkorn is the most ancient wheat domesticated by hunter-gatherers and Neolithic farmers. An almost-forgotten species of diploid wheat from the dawn of agriculture, is being rediscovered today as a power grain, higher in protein and minerals than modern wheat, yet safe for most gluten allergies. Why? Einkorn is not genetically related to modern wheat. All modern wheat developed from wild emmer wheat (T. dicoccides), except einkorn, which evolved independently from wild einkorn (T. baeoticum).
Einkorn has been cherished by villagers through the ages for its rich flavor, digestibility, and high nutrition. It contains more antioxidants, protein, and minerals than modern wheat. It is higher in protein than quinoa. In fact, einkorn is higher in protein than any other small grain. Einkorn’s wildlike ability to translocate nutrients into the seed translates into an average of 30% higher protein; 15% less starch; 200% higher lutein; 50% greater manganese, riboflavin, and zinc; and about 20% higher magnesium, thiamin, niacin, iron, and vitamin B6 than modern wheat.
Our Einkorn Gigli Rigati are made with stoneground wholegrain einkorn so that none of the amazing nutrional and health benefits of this grain are lost in the milling process. Not to degenerate any of the vitamins we produce and dry our pasta at low temperature. The same bouquet we enjoy when mixing einkorn flour with water we recognise in our finished dry pasta as a sign that nothing is lost in our artisan process. Einkorn tastes of honey, honeycomb, chamomile, vanilla, cinnamon and white chocolate.