You can use the recipe search box below to find some tasty new recipes. 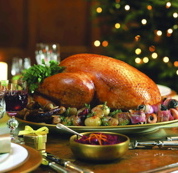 Make a small slit on the flat side of the chestnuts, place in a large pot with enough water to cover and boil until tender, remove from the pan, peel off the skin and fibres being careful not to break the chestnuts.

In a large pan heat 3 tablespoons of butter and saute the onion for 2-3 minutes until slightly wilted. Add the celery and continue to saute for a further 3-4 minutes. Add the liver and ground steak, stirring until lightly browned, pour in 1/2 cup of water and add the spices, cook uncovered over a low heat for 3-4 minutes. Stir in the raisins, the mixed nuts and the prepared chestnuts and continue to simmer for a further 4-6 minutes until the liquid has been absorbed. Remove from the heat and cool the stuffing slightly, remove the cinnamon stick.

Wash the turkey inside and out and pat dry. Melt the remaining butter and brush over the bird, season lightly. Fill the large cavity with the stuffing and sew closed, add the remaining stuffing to the neck end and sew closed. Place the turkey in a large, shallow baking pan and add 1/2 cup of warm water and the dry white wine, roast for 3 1/2 to 4 hours or until tender and cooked, basting with the pan juices every 15 minutes.