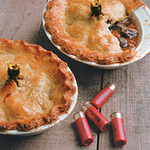 In our opinion game is absolutely delicious and under-rated! At this time of year you can usually track some down in your local pub, but there’s a premium charged if you’re looking for meats in the supermarket and in some butchers. Game though, is often cheap to buy and surprisingly delicious to cook, so we think game should be enjoyed by everyone. The divide is more symptomatic of the way supermarkets have separated us from where our food actually comes from.

Like many instances of raising animals, there’s a benefit to British wildlife to rearing game. One of which is the cover crops used to home the birds create homes for other animals such as the hedgehog.

A lot of game birds like pheasant, partridge, venison and pigeon are incredibly versatile and low fat meats and it’s crazy that they’re not more widely eaten.

With top chefs across the UK using the short game season as a way to liven up their menus, it’s about time game became more commonplace at home. Best of all this meat is easy to prepare and quick to cook, making it the perfect choice for time-strapped cooks.

Not too sure what to do with your game? It’s good with pies to salads and hot pots to soups, essentially game can easily substitute red or white meat and bring a whole new dimension to your cooking.