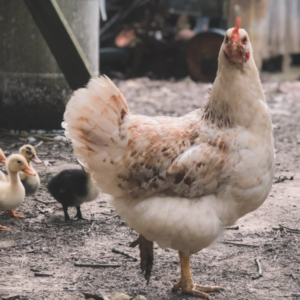 Our most popular meat in the UK but rarely seen alive. The vast majority are locked in huge sheds and only live for 6 weeks!

Luckily a few of the chicken population are becoming a part of everyday country, and even urban life. At BigBarn we would love to see every school have a few chickens and even be included on the curriculum. Perhaps if we educate the next generation about real food, they, and their parents will make better food buying choices and have a clear conscience about what they eat and the effect on animal welfare and the planet.

Here are some chicken facts

There are 5,000+ fried chicken takeaways/restaurants in London!

There are more chickens on earth than people – 25 billion 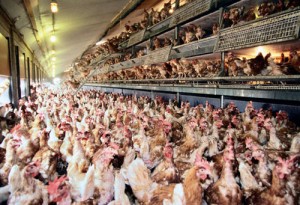 Chickens were domesticated in Southern China around 8,000 years ago in 6000 B.C.

As chickens grow older, they lay larger eggs, but fewer than when they’re younger.

A hen has to eat about four pounds of feed to make one dozen eggs.

On average, 97 chickens are killed every 0.05 seconds worldwide.

Going vegan but like chicken? A wild mushroom called a Laetiporus tastes nearly the same as chicken

Chickens are the closest living relative of the Tyrannosaurus Rex. 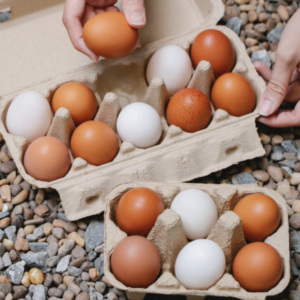 If the white of an egg is cloudy, it means the egg is fresh.

When chickens feel stressed, they start to lose their feathers.

It only takes about 26 hours for a hen to produce an egg, and 21 days for the egg to incubate and hatch.

The longest recorded chicken to live was 16 years old

Chickens have their own unique language with over 30 different sounds used to communicate.

Chickens can run up to 9 miles per hour!

Mother hens talk to their chicks while they’re still in the eggs, and the chicks can chirp back while in the shell. 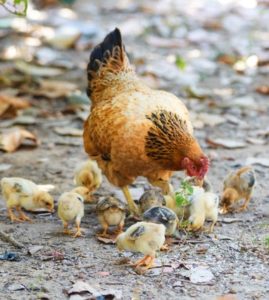 Mother hens talk to their chicks

In 1950 British people ate less than a kilo of chicken in a whole year. Now, we eat on average 25kg in a year

Mother hens talk to their chicks[/caption]

EU & UK Directive on broiler chickens allows the equivalent of around 19 birds per square metre, USA & rest of world many more birds/m2

Wow, lots of worrying facts. And why our government MUST keep our food, and animal welfare standards high and ban, or tax, low grade foreign imports like chlorinated chicken from the USA.

Unfortunately intensive, free range and organic chicken look almost exactly the same on the supermarket shelf, and when covered in bread sauce, gravy or ketchup, probably taste the same. Please think about the intensively reared chicken and buy the free range bird and perhaps save money by eating less.

Whether you choose a standard chicken, or a higher welfare bird, it is by far the best value to buy a whole bird. Roast it on a Sunday and then trim off every scrap of meat and use it in curries, stir-fries or risottos. And don’t forget the bones, boil them up with herbs and a few veggies for a delicious stock.

To discover some fantastic poultry producers online try our MarketPlace . Or search our local food map for a farm shop or deli in your area selling high quality meat and poultry.

But, what can you do with your bird when you’ve got it? Click here for some fab tips and ideas on preparing and cooking your delicious bird.

Or, if you have your own favourite chicken recipe, why not share it with us? For the chance to win a prize, please video your recipe and add it to KIS (Keep it Simple) Cookery. Please have a look at existing videos here and try and keep your video less than 2 minutes long.