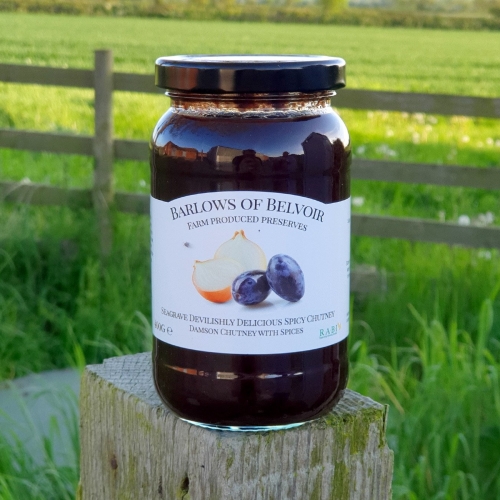 One of the earliest mentions of Seagrave (previously Segrave) is in the Domesday Book where it is listed amongst the lands in the Wapentake of Goscote given to Henry de Ferrers by William I - a Wapentake (Old Norse) amounts to the equivalent of an English "Hundred" - that is to say an administrative division that is part of a larger region.

By the twelfth century, the village and surrounds were owned by the de Segrave family who built a fortified manor house in the parish. But this was burnt out when, in March 1234, Richard Siward, a 13th-century mercenary, launched an attack on the property and made off with plenty of livestock and treasures.

Prior to the raid and various other misdemeanours, Siward had taken part in the 6th Crusade which set out to regain Jerusalem 1228 - originally damsons came from an area around Damascus, hence the name, and some say the Crusaders brought back damson stones to try in England.

Dark and spicy, our Seagrave Damson Chutney makes a flavoursome accompaniment to cold cuts, cheese, sausages, jacket potatoes and much more. Abandon the teaspoon and dispense with much larger spoon.